This is the repository for hop-ups and mods for Elite and Spree. Look here for information on exhausts, porting, cylinders, intakes, and suspension mods.

From Expressly Mopeds, http://www.network54.com/Forum/26489
Brian did a lot of work around the Jan 2002 timeframe on hopping up Spree. This is one of his articles:

First, I should put this on a word format and do a cut paste once a month, but what the heck typing ain't that hard. Next you will want too copy paste to a word format so you can print this out. It is long and detailed.

This pulley mod, is for sprees and it is done to change the gearing and give more top end speed. On a average modified spree, I was able to hit 45 mph + easily. *, on a highly modified spree almost hit 70 mph.

Pre-step A. You will need 3 washers 1/16" thin, 3/4 inch outside diameter, 1/2 inch inside diameter. These will be used to align the front pulley after mod.

Pre-Step B. You must mark on the front pulley with a pencil or something where the outside of the belt rides on. You will need this measurement to get the riding circumference of the belt on the front pulley before. You will do it again after the mod. By having the two circumferences and subracting the difference and dividing by two you will have the length to add to the stock belt. It is just basic geometry. Circumference is diameter times pi. We divide the difference by two because the belt only rides on 1/2 the pulley at all times. Also the diference in percentage of pulley circumference will be the percentage gained in top end speed. If you wanting to calculate and exact number

Step one: Remove the tranny cover to expose the drive belt and drive pulleys.
2. Remove the rear and front pulley, anything more than 3000 miles on the spree and you should look at the clutch shoes in the rear pulley. If they are less than 1/16 inc thick replace them. Also you will need the old belt removed so you can take to autozone or equivalent to get a new belt.
3. On the front pulley assembly, you will have two pulley halves. A thin steel one with teeth and a thick brass colored one. On the brass colored pulley half you will notice a lip on the inner surface.
4. This lip is a fixed spacer between the two pulley halves and sets the drive gear. The farther away the two halves the lower the gear and more low end power you will have. The closer the halfs are the higher the drive gear will be and the more top end speed you will have.
5. So a filing or grinding we shall go. Remove however much you feel squirrely for. The more you remove the more top end speed you will have. However you will lose on low end torque. You must buy a longer belt.
5.1 Reassemble with the old belt. Mark the ride height on the pulley. Disassemble and do some math. Refer to pre-step b.
6. By making the front pulley drive face larger, the belt will force the rear variable pulley apart. This basically does a double whammy on your low end gearing. Because not only have you increased the size of the front pulley, you have decreased the size of the rear pulley, since the belt doesn't stretch. To reduce the effect you must by a longer belt.
7. So add the number from pre-step b to the stock pulley length. Go to the auto parts store and ask them for a belt that thickness with the specified length or as close as they can get. It will be about 80 percent cheaper than buying a new belt from honda.

8. Reassembly, using the washers not all, only the amount needed. Whatever thickness you removed from the front lip, 1/2 of that thickness must be added to the rear of the pulley for proper alignment. Plus the other 1/2 of that thickness must be placed between the outside pulley half and the mounting nut. It the pulleys are not aligned close the belt will wear out quickly and power will be lost to friction.

Final note. the more you remove the more top end speed you will get, but you will, even with the longer belt lose low end power and torque. It's like starting a car off in second gear instead of first. 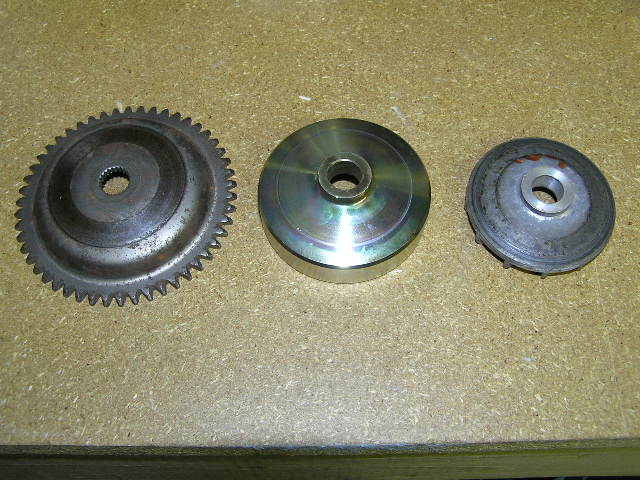 You can remove about .03" from the older aluminum pulley. It really only requires a good flat mill file and a micrometer to measure progress and ensure the interface is being milled evenly.

The center pulley is steel. In addition to being larger it is heavier. You can remove up to .125" by my calculations, and I've run pulleys with as much as .100" removed. This operation will, however, require a mill or lathe. Too much material to remove in my mind, given that it's steel.
Admin, Hondaspree.net

Last thing... start with removing a little material at a time. How much? Try about .03" at a time.
Admin, Hondaspree.net